This algorithm produces eventually all numbers between 0 and 255, but the sequence does not repeat until 59748 values. The routine has a 16bit state, but yields an 8 bit value. The randomization is a combination of an ASL, EOR and ADC command. The name AX+ is derived from comes from the ASL, XOR and addition operation. I have tested several other triplets of similar operations, this version here gave the longest period.

This version stores the seed as arguments and uses self-modifying code and requires only 15 bytes for the random function. The execution time is constant at 18 cycles and much faster than for example a 789-Xorshift.

The seeding function was tricky, since putting any two values into b1 and c1 comes with a 10% risk of ending up in a cycle with shorter period. Therefore, a seeding function is provided that takes an 8 bit value and generates a seed that is guaranteed to be in cycle with a period of 59748. Thus, there are 256 different states reachable after seeding.

In a test, I plotted the output of 51200 random values, which don't seem to reveal any visible patterns: 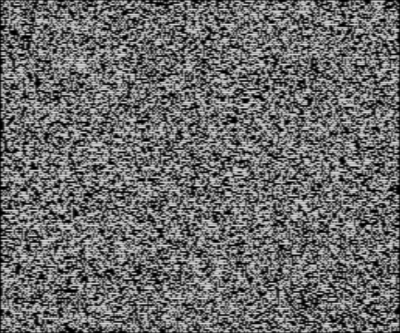